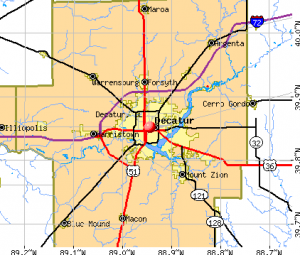 Within 12 hours, three fatalities occurred on Macon County, Illinois roadways. All three motor vehicle crashes occurred between Sunday night and Monday morning. Police have indicated that alcohol is suspected as a factor in one of the incidents.

A 17 month-old Decatur girl suffered fatal injuries in a head-on motor vehicle collision on Lost Bridge Road near Western Drive. She passed at 1:05 a.m. at the hospital.

Decatur Police stated that it appeared that the 30 year-old driver of the car with the child occupant was impaired by alcohol. Preliminary investigation indicates the driver’s eastbound vehicle crossed the center line and collided with a westbound pickup truck at 12:22 a.m.  The driver was hospitalized with injuries and the pickup driver later sought medical treatment. The crash remains under investigation.

A 60 year-old Decatur man died at 7:52 p.m. Sunday night in the emergency room of Decatur Memorial Hospital. The man’s vehicle struck a utility pole around 7 p.m. at the intersection of Martin Luther King, Jr. Drive and Grand Ave according to police.  The autopsy showed no signs of trauma or significant injury.  Toxicology and other laboratory tests to determine the cause of death were pending.

A 28 year-old Gary, Indiana man died at approximately 3:30 a.m. on Monday after he suffered massive injuries in a pedestrian incident when he was struck by both a semi-truck and a car as he walked in the roadway around 2:45 a.m. on U.S. 51 just north of Hampshire Road near Maroa. According to authorities, the victim had gotten out of his nearby parked vehicle for an unknown reason.

When there is a fatal motor vehicle crash, accident reconstruction experts typically do a full reconstruction for several reasons.  The reconstruction is critical as it helps to determine the causes of the crash to determine liability and also, to contribute to the ever increasing research data for safety experts, car manufacturers and law makers. Following the loss of a loved one is complicated to say the least.  The family is overwhelmed in the event of a death due to a motor vehicle crash and often, too overwhelmed to be worried about gathering evidence and talking with insurance adjusters.  It’s overwhelming when you’re not injured, let alone if you are seriously injured or have lost a loved one.

It is not a process you should go through alone. It’s the very reason that you contact an expert car crash attorney. Our attorneys understand the importance of timely gathering of evidence and negotiating with the insurance company so that the injured or family members of the deceased can concentrate on the things that really matter.